Florida: Tobacco 21 is no more

If you were planning on Tobacco 21 making it through the Florida legislature, you will have to wait another year.  One of the best reasons for raising the legal tobacco age to 21 in Florida is to keep 18 year olds, who are already of legal age, from purchasing tobacco and vaping products for younger peers.  If you raise the age, you are removing one of the sources of distribution.  While we were excited about the bill, there were things the legislature added to it to make it less effective.

First, members of the legislature excluded members of the military from the age restriction.  They felt if an 18 year old could join the military, they were adult enough to make the decision whether to smoke or not.  But there are several things about that decision the legislature has not taken into consideration.  For decades, tobacco prices on military bases have been lower, making it cheaper and easier to purchase tobacco.  This isn’t being patriotic and giving our military members a break, this is targeting.  Military smoking rates are substantially higher than civilian rates and cost the Department of Defense over $1.6 billion per year including tobacco-related hospitalization, medical care

and lost workdays.  It wasn’t until 2016 that DOD policy guidelines “included a rule that tobacco products sold on bases, must cost the same as those sold in nearly retail outlets,” but many have found prices on bases are still below civilian prices. Making military members part of the age restriction means protecting their lives.

Second, Florida would exempt cigars from this bill thanks to the strong cigar lobby in our state.  One of the biggest makers of 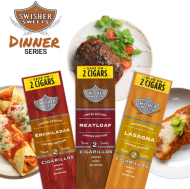 cigars, “Swisher International, known for ‘Swisher Sweets,” is based in Jacksonville, Florida.  Flavored cigarettes were banned in 2009, but the number of flavored little cigars has exploded and are popular with teens. The majority of Swisher’s products aren’t hand-rolled cigars a true aficionado would smoke.  These filtered, cigarette-sized, loose leaf tobacco, highly flavored little cigars are smoked like a cigarette and marketed to

kids.  Easy to find YouTube videos that show how the products are cut and the loose tobacco removed to be replace with marijuana.  The strong flavorings of the cigar paper cut the smell when burned.  New Swisher products include lunch and dinner flavors. Cigars in Florida are not taxed.

The cigar exemption doesn’t make sense, but one member of the Florida Legislature has made his family’s fortune through the family cigar business and only stepped down as CEO when he became speaker.  Vape shop owners complained raising the tobacco age to 21 would hurt their business.

The original bill would have also “decriminalized selling tobacco to minors.”  We wouldn’t have this vaping epidemic in our state if retailers would follow the law that specifically states “it is unlawful to sell, deliver, barter, furnish, or give, directly or indirectly, to any person who is under 18 years of age, any nicotine product or a nicotine dispensing device.”  The federal tobacco law is currently at 18 years of age as well, but may be raised, meaning our state would follow the federal law.

And what about those kids in rural areas like the Panhandle who are addicted to nicotine from smokeless tobacco?  Raising the age to 21 means they can’t use vaping products, which contain nicotine, to get off smokeless products.  This was a voiced concern of lawmakers, but substituting one form of nicotine for another is not the answer.  Nicotine changes the brain, especially in young teens, making the addiction stronger and affecting other body systems.