Kick Butts Day, March 20, 2019, is almost here!  This national day of activism, was started by the Campaign for Tobacco-Free Kids in 1996, bringing students, teachers, public health advocates and other community leaders together to “organize events designed to get youth to stand out, speak up and seize control against Big Tobacco.”

Did you know that tobacco use is the leading cause of preventable death here in the U.S. and around the world?  It causes many forms of cancer, as well as heart disease and COPD, and damages nearly every organ in the human body.  Here in the U.S. more than 480,000 people die every year due to their tobacco use.

Did you know that almost 90% of adults start using tobacco as teens or even earlier?  Kick Butts Day draws attention to the tobacco industry and their deceptive marketing practices that encourage kids to start tobacco.   It is our youth and their voices that encourage their peers and others to be tobacco-free and to stand up to the tobacco industry.

Back in 2012, the Surgeon General’s Report called teen tobacco use a “pediatric epidemic,” but the focus has shifted from tobacco to e-cigarettes and vaping.  While current cigarette 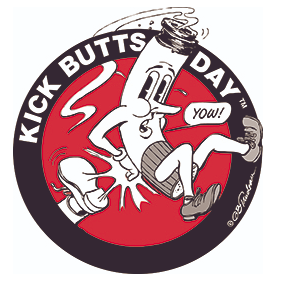 It is so important that our youth continue to speak out against tobacco and an industry that is finding new ways to addict them to nicotine.  Support our teens as they use their voices to affect social change in their communities and throughout the United States.  Every day should be Kick Butts Day.