Posted on December 20, 2018 by tobaccopreventionk12

Monitoring the Future has released the report “National Adolescent Drug Trends in 2018, by the University of Michigan Institute for Social Research, which looks at historic trends of substance use by teens in 8th, 10th and 12th grades. While all drug use was covered in the report, and we mentioned some of them, we focused on tobacco and vaping trends.

Some notable declines were observed in cigarette smoking, prescription opioids and tranquilizers, and binge drinking, while substances like marijuana, and tobacco products such as smokeless tobacco, snus, hookah, and small and large cigar use remained steady.  Vaping has grown from almost zero use in 2011 to one of the most common forms of substance use by teens since 2015.  Despite a decline in use in 2016, it doubled between 2017 and 2018, marking the largest increase for any substance use in the survey’s 43-year history.  Increases of “perceived risk” and disapproval contributed to the downturn of cigarettes use, but youth see e-cigarettes as having some of the lowest levels of perceived risk of any substance.

U.S. teens are more likely to use cigarettes than other drug forms, except marijuana.  The report shows 27% of 12th graders have tried cigarettes during their lifetime and 10% have smoked in the past 30 days.  Results for 10th and 8th graders are lower: 10th grade numbers are 16% and 5.0%, while 8th grade results are 9.4% and 1.9%. The results for vaping nicotine is almost as high as consuming it through cigarettes: lifetime use is 25%, 22% and 11% in grades 12th, 10th and 8th respectively.

Some tobacco products were more gender specific in use.  Males in 12th grade are more likely to vape nicotine than females, 22% vs. 16%.  Smokeless tobacco is “almost exclusively” a male behavior with 9.9% of 12th grade males vs. 0.7% of females reporting use in the past month.  Other nicotine product use such as hookah, large cigars, regular and flavored little cigars, dissolvable tobacco, and snus also tend to have more male use.

We can see percentages of students vaping through media reports, but don’t often see the percentages reported of those who don’t vape.  TABLE 4-4a (below) shows the percentage of students “vaping nicotine” and 89.4% of students in 8th grade have not vaped on any occasion.  While the number decreases as the students get older, it is still good to know that 78.6% of 10th graders and 75.0% of 12th graders haven’t vaped.  It is true, not everyone is vaping. 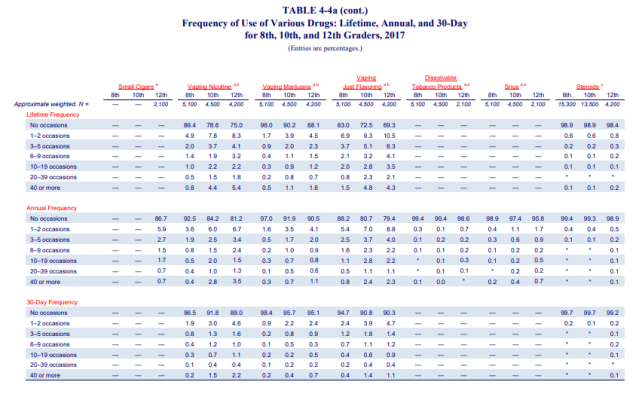 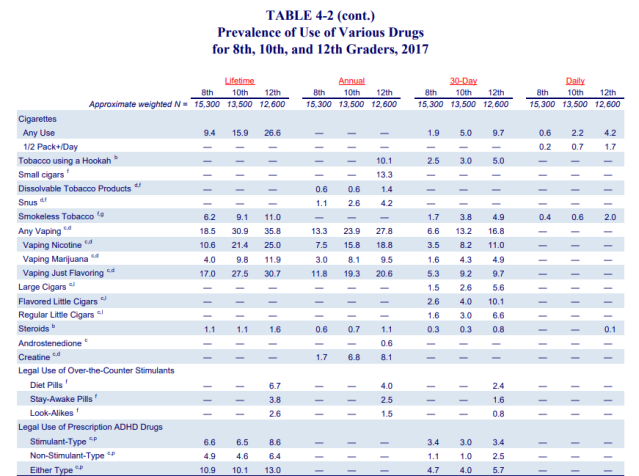 The report also identified three distinct classes of vapers:  those vaping to experiment (29.4%), vaping to replace cigarettes (7.3%) and vaping for taste + entertainment (63.4%), proving that flavors are an important draw for teens to try flavored e-cigarettes (page 511).

Cigarette use declined due to education of students through the media and tobacco prevention education programs in schools.  Now vaping has taken the place of cigarettes and the industry has shifted their message from telling users their product is “harmless water vapor” to saying it is “safer” and “less harmful” than smoking cigarettes.  Yet they refuse to tell consumers what chemicals are in the devices or that they are highly addictive, especially to teens.  It is up to us to educate our students to give them the best possible chance to make an informed decision about their future health.

The Florida Tobacco Prevention Training for Educators has had an online tobacco prevention course for educators since SY2011.  We have seen shifts in tobacco use and have kept up with the trends so our educators are informed.  While we have had information regarding vaping in previous courses, this year we have expanded the information and dedicated an entire chapter to electronic nicotine delivery systems (ENDS) including marketing, chemicals and the hazardous effects on health.  This information is included in both the 30- and 60-point courses and the Florida School Nurse’s course.  Palm Beach County educators have a 10-point course just on ENDS.  All courses are at no cost to participants or their districts.  At the completion of the course, participants receive credits towards renewing their Florida DOE certificate.  Our participants can make a difference in protecting Florida students from tobacco and vaping harms.

Click HERE for the Monitoring the Future Report 2018
Click HERE for more information on the Florida Tobacco Prevention Training for Educators online course.