Posted on September 6, 2018 by tobaccopreventionk12

Back in 2009, the Family Smoking Prevention and Tobacco Control Act was signed into law giving the “FDA authority to regulate the manufacture, distribution, and marketing of tobacco products.”  One of the features of the Act was to include graphic warning labels on cigarette packs and on cigarette advertising.  Big Tobacco challenged the warning labels as violating their First Amendment grounds, and at that time the Court sided with the tobacco industry.  A Court of Appeals found the law didn’t violate the First Amendment and the labels “are reasonably related to the government’s interest in preventing consumer deception and are therefore constitutional.”  Although the original labels were struck down by a court in 2o12, the FDA is still legally obligated to require the warnings.  The FDA hasn’t acted, until forced to do so by this lawsuit.

A lawsuit was filed in October 2016 by various health groups against the FDA for not moving forward with the warning labels and U.S. District Judge Indira Talwani agreed.  According to the judge, “the FDA has both “unlawfully withheld” and “unreasonably delayed” agency action to require the graphic warnings.”  The FDA has until September 26, 2018 to provide a schedule of action for the warning labels, “in accordance with the Tobacco Control Act.” 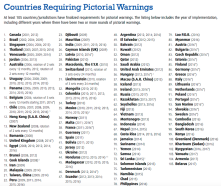 Tobacco use is the #1 cause of preventable death around the world and at least 105 countries already require graphic warnings on their cigarette packs.     Australia, the first country in the world to move from small graphic warning labels to plain packaging and

larger pictures, has seen good success with lowering both youth and adult smoking since the labels were required.  All cigarette packs must be uniform in color, fonts and branding, and all must include graphic

pictures of what smoking does to the body.  And they aren’t the only country in requiring graphic pictures.  Uruguay, Nepal and Sri Lanka, all developing countries, are farther ahead in protecting the health of their citizens.

In 1966, the United States became the first nation in the world to require warning labels

on cigarette packs, but the warnings printed on the side of the pack haven’t been updated in decades and largely go unnoticed.  When

the FDA first proposed graphic labels, the pictures were almost unrealistic and were rejected for not being graphic enough. Now that other countries have had success with their warning labels, perhaps the use of strong pictures will “gain and hold the attention of smokers.”

Pictures of real health issues caused by smoking need to be seen to get the message across that smoking is harmful to the health of everyone.  Implementing graphic warning labels would decrease youth and adult smoking rates even further in the U.S. and would protect our future generations from starting this deadly addiction.

Click HERE for Campaign for Tobacco Free Kids press release and warning labels.   Countries Requiring Pictorial Warnings, Australia 2006 vs 2012 and warning pictures from other countries are from theskepticalcardiologist.com.  The image of the Surgeon General warning on the side of a US cigarette pack is from Wikipedia.  The images that were to be used on US cigarette packs is from www.outsidethebeltway.com