Posted on November 10, 2017 by tobaccopreventionk12 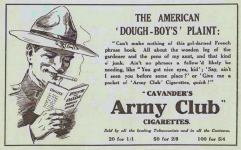 have much higher rates of use including those of our military.  From providing free tobacco during World War I and World War II to providing discounted prices on military bases today, the tobacco industry continues to see our military men and women as a important marketing target.

The reasons for joining the military are many, from pride, patriotism and family traditions, to career opportunities.  But the tobacco industry sees service people differently, according to their internal documents.  While members of the service are seen as a “desirable” sales market to the tobacco industry, they are also seen as “less educated,”

“part of the wrong crowd,” and “classic downscale smoker.”  Since 99% of all smokers start by 26 years of age, the tobacco industry works hard to capture as many as they can from this market.  Is it any wonder so many of our military members use tobacco?

Smoking rates in the civilian population continue to fall, yet rates in the military lag far behind.  According to a Department of Defense 2011 report, 49.2% of all military service members had “used a nicotine product in the past 12 months,” while 24.0% of “active duty military personnel reported currently smoking.” Compare that to 19.0% of the civilian population for the same time period.  Sadly, 38% of our service personnel picked up their habit after joining the military.  Smoking rates even vary within the different branches with a high of 30.8% in the U.S. Marine Corp to 16.7% smoking in the U.S. Air Force.  Smoking in the Army and Navy fall between the high and the low but are above civilian smoking rates.

Smoking isn’t the only tobacco product used at rates higher than the civilian population. According to the same 2011 DOD report military, use of smokeless tobacco in the past month was 12.8% while civilian smokeless tobacco use was reported at 3.2%.  Again, the U.S. Marine Corp had the highest use at 21.3% while the Air Force was the lowest at 8.7%.  The Army rate was above the average; the Navy rate fell below.  Younger personnel are also more likely than older personnel to use smokeless tobacco.

Military members aren’t the only ones being targeted.  Family members are also considered an important market segment for the tobacco industry.  Back in the early 1980s Brown & Williamson sponsored bingo nights on military bases and those attending received free cigarettes as well as coupons to keep them coming back for more product.

New recruits can’t smoke during basic training, but policies and enforcement vary depending on the service and installation.  The continued pro-smoking culture and the inexpensive tobacco prices on military bases may lead personnel to begin to smoke.  Prior

to a change in policy, tobacco prices on base could be 5 percent below local prices, but deep discounts of up to 73 percent were found.  In an attempt to improve the health of service personnel, tobacco products on base now have to match the competitive prices in the local community.

Smoking and nicotine use decreases the readiness and physical performance of our military personnel, and increases their odds of injury as well as the amount of time needed to wound healing.  The DOD spends billions of dollars every year on tobacco-related medical care for both active duty members and veterans.  Our military personnel are either currently fighting for their country or fought in the past.  They shouldn’t have to continue to fight for their health by being a tobacco target.

Click HERE and HERE for information used in this blog.
In the military and want to quit?  Click HERE