Desire to quit tobacco high among some young smokers

Nicotine is the naturally occurring drug found in tobacco and the reason why most users are addicted.  In fact, according to the Centers for Disease Control (CDC), more people in the U.S. are addicted to nicotine than to any other drug.  But the problem reaches much farther than the U.S. boundaries; it is a worldwide health problem that kills 6 million people a year by getting them and keeping them hooked to the nicotine in tobacco, and it starts in the teen years. 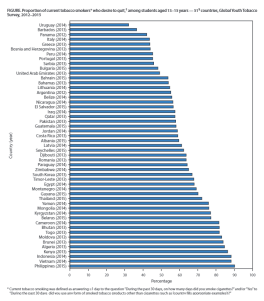 In the CDC Morbidity and Mortality Weekly Report for May 26, 2017, data from the Global Youth Tobacco Survey from 61 countries during 2012 to 2015 was analyzed to determine the current smoking rate and the desire to quit among students 13-15 years of age.  They found the median current smoking prevalence was 10.7% and ranged from 1.7% in Sri Lanka to 35.0% in Timor-Leste, both countries in the South East Asian Region.

The median current tobacco smoking was higher for boys at 14.6% than for girls at 7.5%.  Again, South East Asian Region had the highest prevalence of boys smoking with Indonesia at 35.5% and Timor-Leste at 61.4%.   But in several countries, the prevalence of girls smoking was higher than boys: Mozambique, Belarus, Bulgaria, Italy, Portugal, San Marino, Argentina, and Uruguay.  Bulgaria reported the highest smoking rate among girls at 29.0%.

Hopefully, information from this report will help those countries determine the right course to take to protect their young people from the marketing and use of tobacco.