Posted on February 7, 2017 by tobaccopreventionk12

We have all read the articles about e-cigarettes, both good and bad.   The good news may include information how e-cigarettes have helped adults quit smoking combustible cigarettes.  Bad news that was trending just last week said e-cigarette smoking may be bad for your heart, among other things. Get ready to add another article to the bad side of e-cigarettes. A new study out Monday in Pediatrics shows one in four high school teens has tried “dripping” which involves putting e-liquid directly on the hot coils of the atomizer.

Normal e-cigarette use involves the liquid being slowly released “from a wick onto a hot atomizer” which produces a vapor that users inhale.  Dripping involves “dropping e-cigarette liquid directly onto the hot coils of the device to produce thicker, more flavorful smoke.” The problem is that it exposes “users to higher levels of nicotine” as well as higher levels of toxins that are known carcinogens. 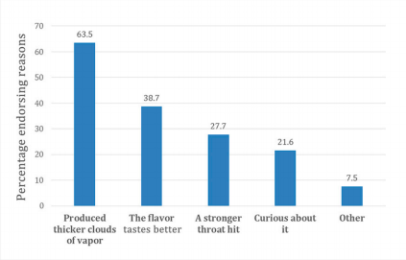 Not all e-cigarette liquids contain nicotine, but by using the dripping method it appears the users are using nicotine which produces a “stronger sensation” or “throat hit.”  Of those using the method, 64% said it was for the “thicker smoke, 39% for the better flavor, and 28% for the stronger throat hit or sensation.”  The report suggests that those using this method may be using “e-cigarettes for smoke tricks and vape competitions.” It also exposes the user to higher levels of nicotine then they would receive from a puff.

A study of almost 2,000 high school students in Connecticut found that half of the teens had used e-cigarettes and about “26% had also tried dripping.” Most were white, and male who “had tried more tobacco products or used an e-cigarette more in the past month.”  The students weren’t asked if their dripping was “habitual,” or what flavors were being used.

The CEO of Tobacco Vapor Electronic Cigarette Association believes those who are dripping are a small segment of users, the ‘do-it-yourself’ guys who are “manufacturing their own hardware,” and going for the monster clouds.  Although the CEO called e-cigarettes an “adult product,” he said he would rather see a teenager use an e-cigarette than a traditional cigarette.  The problem is two-fold: it addicts a teen to nicotine who otherwise would not smoke and creates a higher nicotine hit which may be more addicting, and many who start with e-cigarettes become tobacco users.

Although this survey was conducted in Connecticut, the researchers “cannot speak to the generalizability of these findings to youth from other states in the U.S.”  However, they did mention the information was found online so the method can easily be accessed by anyone.  The researchers admit there are a lot of questions that weren’t asked, and the results may be limited because the results were self-reported, but they feel larger, national surveys are needed to collect “alternative e-cigarette use behaviors.