Posted on October 3, 2016 by tobaccopreventionk12

Another month has passed and it is time again for Trinkets and Trash, the newsletter that keeps you in the know about tobacco products and what the tobacco industry is up to next. 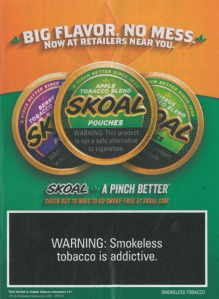 Instead of going smokeless by vaping, you should turn to the original smokeless products, according to the smokeless tobacco industry.   Skoal has a couple of flavor blends they are promoting, as well as 29 other ways (additional flavors) for tobacco users to go smoke-free. Back in the day a real smokeless user didn’t need flavorings in the tobacco because it already had a flavor…tobacco!  Just who is getting targeted with these candy flavorings?

And according to General Snus, the snus user gets the girl.  Or least until she discovers that awful taste when you kiss.

One electronic cigarette brand, NJOY, has declared bankruptcy, blaming, in part, the “substantial expenses” associated with the FDA’s new regulations.  Could it be that they just had a higher opinion of their product then potential users?  But fear not, they

say their product is still available in ” a majority of the largest supermarket and convenience store chains. ”

Remember the Mayhem guy from Allstate?  Met Dark Mint Dwayne introduced in a series of memes from Grizzly.  Users can go to the Grizzly site and vote or “bump” “(a.k.a. like – but much manlier) your favorite user generated memes,” or make

their own meme, but watch what you say, there are guidelines.  “Mantastic” prizes will be won by the favorite memes.

In order to combat the dwindling smoking population, Newport is going directly to the consumer and setting up a mobile air-conditioned trailer called the “Newport Pleasure Lounge” at summer music festivals.  You visit, you get a coupon.  Newport ads rarely feature smokers anymore, and it appears no one is smoking in this lounge either.

If you would like to receive all the latest and greatest news on the tobacco industry, sign up for Trinkets and Trash.