COPD Awareness and What You Need to Know

Posted on November 4, 2015 by tobaccopreventionk12

What is it like to have a disease and not even know it?  According to a Chronic Obstructive Pulmonary Disease fact sheet, “half of the estimated 24 million people who have COPD don’t even know it,” yet it is the third leading cause of death in the U.S.  At the moment there is no cure, but knowing the signs and symptoms could help you seek the necessary treatment that could help you better manage your disease.

COPD isn’t just one disease, but a group of diseases, such as chronic bronchitis and emphysema, that make breathing difficult.   Smoking is the leading cause of COPD, with 9 out of 10 COPD patient deaths related to smoking, but those exposed to secondhand smoke at home or work may also be affected.  Other sufferers may have had long-term exposure to irritants in the workplace, such as chemicals or dust.  In some incidences, a genetic condition may cause the condition. 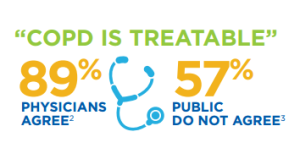 COPD comes on gradually and gets worse over time.  The cough and phlegm production you had on occasion becomes an everyday occurrence.  Walking and activities become more difficult because you become short of breath and you find you are wheezing more often. And speaking of breathing, it becomes more difficult, if not impossible, to take a deep breath.  There is no cure, and your symptoms won’t just go away, but the sooner you have an honest talk with a doctor about your symptoms, the sooner you can start your path to living better with COPD.

Many believe COPD is an “old age disease”, but the younger you start smoking, the earlier you can develop it.  Supermodel Christy Turlington had been smoking for 15 years when she was diagnosed at age 31 with early-stage emphysema.  Amy Winehouse died at age 27 and had been diagnosed with COPD at age 24.  There is no average age for this disease, but quitting smoking and early diagnosis are key to living a better life.

If you would like more information on COPD, you can click on the following links which were used for this blog:
COPD: What Can You Do About COPD?
COPD: Better Talk Means Better Treatment.
COPD among Adults in Florida